After 20 Years, A Notable DC Journalist Reinvents Herself

After 20 Years, A Notable DC Journalist Reinvents Herself

What exactly does it mean to reinvent one’s self?

That question came to mind when I sat down with former journalist turned PR Executive Lisa Matthews for a one-on-one.

Before transitioning to her role as Vice President of DC Public Relations firm Hager Sharp, Lisa had been with the Associated Press for nearly 20 years.

My millennial brain exploded when I heard this.

When it comes to their careers, most Washingtonians have the same game plan: land a job, scale the organizational ladder, then go on to run your own PR or lobbying firm.

But going from employee to executive is in every sense a reinvention. It seems easy in theory but in practice, it is an entirely different ball game.

So how did Matthews, who had become ingrained in her profession, pull off the envy of every D.C. professional and make the career change of a lifetime?

“If you really want to reinvent yourself, you’ll have to be bold,” says Matthews.

And bold she was.

Her advice is, in many ways, unconventional. Matthews is a black woman. And she believes using things like race, your job title, and whatever else you have going for you to your advantage.

On Making It Personal

Matthews’ foray into journalism started out with a pair of shoes.

She was working in retail when a customer wearing a baseball cap with the Magic 102.3 WMMJ  logo on it walked in.

Matthews leaped one the opportunity.

When the customer had trouble locating a size 12 shoe, she promised to help if he’d help her get an interview at the radio station.

So a deal was made, and both parties held up their end.

Not long after, Matthews was writing the news for WMMJ, and she was on the air. She knew very well the importance of the hustle: she took unpaid jobs, eventually landing one at the National Public Radio. By building her network, she was eventually introduced to Jeffrey Ballou– the 2016 VP of the National Press Club.

“I’ll say I’m a black woman and it’s very important to me that we get this interview. You can’t just be bold, you have to be humble.”

Despite the rise of digital business cards and LinkedIn, Matthews is a testament to the power of being prepared. “I always had my resume with me and was always prepared to promote myself.”

The hustle paid off: she nabbed a job at the Associated Press, where she worked for the next 20 years. There, she got a glimpse at every corner of the newsroom.

“When you’re seeking something new, you have to show that you know when to speak and when not to speak.

It was not a coincidence that that guy happened to walk in that day. It was up to me to open my mouth and speak up. You can’t be afraid to step up when you have what it takes to back it up.

I started as a writer and then I became an in-house reporter then newsroom supervisor and planning editor, assignment manager which was the last thing I did there.”

A healthy dose of perseverance, mixed in with the day-to-day hustle, propelled Matthews down a career path that would be the envy of many.

But it didn’t come easy. “I had to fight for every job I ever had,” she said as she reflected on those early days.

As a journalist, Matthews knows how to use her resources to get a difficult interview. “I’ll say I’m a black woman and it’s very important to me that we get this interview. You can’t just be bold, you have to be humble.”

When Matthews told me this grain of wisdom, I found myself wondering how someone could do both of those things well, and at the same time.

The AP veteran had a few of her own ideas about how to strike the perfect balance, and how important it is to do both.

If it’s not clear from her career trajectory, Matthews thrives off of new challenges. It’s part of the reason her new role excites her.

“What they brought me here for is to help clients craft better stories, but part of being a VP is bringing in new business. I work on parts of the proposal, how to address earned, paid, shared media. Very different from my life at the AP.

On the Typical D.C. Career Trajectory

It seems everyone moves to Washington with the same plan in mind: land a job, scale the organizational ladder, and eventually move to a consulting, lobbying, or VP role.

I asked Lisa if this was her plan all along.

“No, I love and still love the news. I’m the only VP with a TV on my desk. I’m connected to [media] in so many ways.

Everything is changing and I think young people aren’t engaged. They don’t know the ins and outs and history of the media. There are people who voted for Donald Trump just because he is part of the conversation.

I thought I would be at the AP forever. I thought I would have a lifetime career there. There are people there who have been there for 35 or 40 years. I sought to leave when the way that we covered the news started to change.

When I came to Hager Sharp, everyone was seriously engaged. We decide which clients we want to represent and truly believe in what we do.

It took me some time to get this job. I interviewed over the course of 2 years. It was time for me to make a change and make more money. I’m still transitioning and learning client’s needs. I never thought working in PR would be hard. I thought it would be a breeze. I thought I’d be chilling but that is so far from the case.” 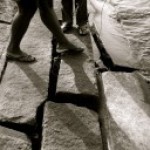